For Rich Epps, being able to run his own business was always a dream.

Working for a big-box home improvement retailer always gave Rich the feeling he wasn’t able to manage the way he wanted.

When the corporate leadership changed, Rich found himself with a generous severance package and a newfound opportunity for business ownership with Batteries Plus.

The Appeal of Learning Store Management

Rich started his career with Lowe’s as a part-time employee and was eventually recruited to join a management program Lowe’s offered to provide promising employees with growth opportunities.

“Lowe’s had a push to attract college grads,” Rich explained. “I had the chance to run the flagship store, got exposure to the corporate team, testing new products and helping out with commercials.”

Rich eventually became the district manager in South Carolina and was asked to move to Florida to take over a struggling Lowe’s district. However, even as a store or district manager, he felt hindered by the corporate structure.

“Although I was always intrigued by the thought of running my own store, I wasn’t able to do what I wanted to successfully operate the store,” said Rich. “I felt like I was managing with one arm tied behind my back.”

Going Down a New Path to Business Ownership

A new CEO resulted in a change in company leadership, leaving Rich with a healthy severance package and the opportunity to start researching franchise opportunities. Rich immediately looked into Batteries Plus because not only was it in his retail wheelhouse, but it had similar products to Lowe’s and gave him the chance to run more than one location.

Before deciding to take the full plunge into business ownership, Rich reached out to Steve Cooper, one of the first Batteries Plus franchisees, to discuss a district manager role overseeing Steve’s seven locations.

“The conversation eventually morphed into me buying the stores,” explained Rich. “Initially, I bought two stores over a couple of months, but then Steve approached me to buy the other five.”

Making the Dream of Leadership a Reality

As the new owner of multiple Batteries Plus locations, Rich finally got to experience his dream of running his own businesses. Rich was able to immerse himself into overseeing operations and managing a network of retail stores.

“With marketing and advertising, I can support the things I want – whether it’s a school or a cause in the community,” said Rich. “Not only that, but I’m able to control the inventory and what we sell. There would be a time when Lowe’s corporate would send a snowblower to a store in South Florida – now I don’t have to deal with something like that happening.”

Connecting With his Communities

Not only does Rich have more control over his stores, but he’s also been able to create strong relationships with his staff and each customer that walks in the door.

With a significantly smaller store footprint than he was used to at Lowe’s, Rich’s locations can offer up one-on-one time with each customer and get to know them and their needs – creating a local, loyal customer base and strong trust in his store’s expertise.

“Just like getting to know my customers, I get to know my staff as well,” explained Rich. “I have 47 employees, and they’re basically family.” 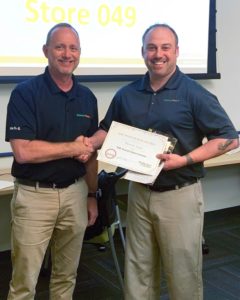 Thriving in Times of Crisis

Jumping into the world of franchising from corporate business has been enriching. Rich has experienced first-hand the value of a supportive franchisor. As he was getting familiar with store-level operations, Rich needed to get up to speed on the accounting software Batteries Plus uses. A member of the Batteries Plus corporate team helped him on an as-needed basis until he was fully proficient.

And while Rich’s Batteries Plus locations survived the 2008 Great Recession under the previous owner, COVID-19 presented an entirely new obstacle – but one that he was able to quickly overcome.

“We saw a decrease in in-store traffic during the initial lockdowns – even though hospitals, first responders and municipalities have an account with Batteries Plus,” said Rich. “Once the lockdowns were eased, we saw a traffic increase since customers weren’t comfortable going into a larger big box store with large crowds. Plus, people are working from home and are bringing in old iPads to fix a screen or battery, as well as old laptops for batteries and new cords.”

Rich was going to sign the lease for his eighth location in Sun City Center, Florida, the day before lockdowns were announced, so he decided to wait. However, when he saw how well his other stores were doing during the shutdown, he reconsidered and ended up signing in May.

Rich’s eighth store is projected to open by mid-to-late October 2020 and will join his other locations in Sarasota, St. Petersburg and Lakewood Ranch as he continues to serve his communities with essential products and services.

Looking to join a franchise that continues to thrive during unprecedented challenges? Get started today by filling out the form below!